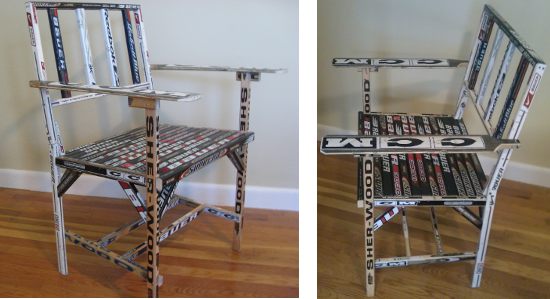 Not your average hockey stick chair… a comfortable one.

The hockey stick chair is a really cool hockey stick furniture project and will definitely turn heads. It’s fun and easy enough to do even if you’re not comfortable with trigonometry or the use of calculators (I give you the numbers)! I promise no hyperbolic functions (sinh, cosh, etc. unless you prefer to work in non-Cartesian coordinates), though regular trig will need to make an appearance at least once in your design phase if you’d like to strike out on your own.

If you’ve looked at my other pages, you see break down each design into simpler parts that are easier to approach. The hockey stick chair project doesn’t lend itself well to being divided but not to be deterred, here’s a shot:

This first thing to note is that the seat and back are not at 90° to each other, the ground, or the vertical. Chair seats are intentionally declined toward the back to keep you from sliding out and the backs are further declined to make them more comfortable. See here for a great explanation of seat dimensions and suggestions for maximum comfort. Our seat will be declined 5° from the horizontal and the back 10° from the vertical, making a seat-to-back angle of 95°. 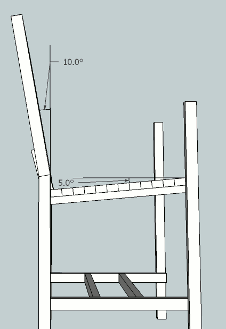 This doesn’t involve many special tools, but does involve a couple more types of hardware. than usual. A smartphone with a level app is a must. I can’t imagine doing this without it, especially because the angles are small and a digital readout makes things a LOT easier.

The seat follows the formulas for making nice flat even surfaces as covered under cutting in Building and at the beginning of  Coffee Table. When I made the chair, I just used the miter saw and a template. This greatly simplified the construction process for me and I was willing to deal with tiny gaps at the ends since they would be covered. The seat width is 20″ and I made the overall seat depth a total of 14.5 sticks in the end. (You’ll see the half later.) The measured depth depends on your stick widths. In the end, plan on about 17″ for depth. This will quickly change as you build, so adjust yours as necessary. Shown below is the attachment for the first 13 sticks. Don’t include the 14th which will be at the back or the 0.5 which will be at the front.  The frontmost stick here will be angled which will cause slight problems will the supports, but we’ll cross that bridge later. 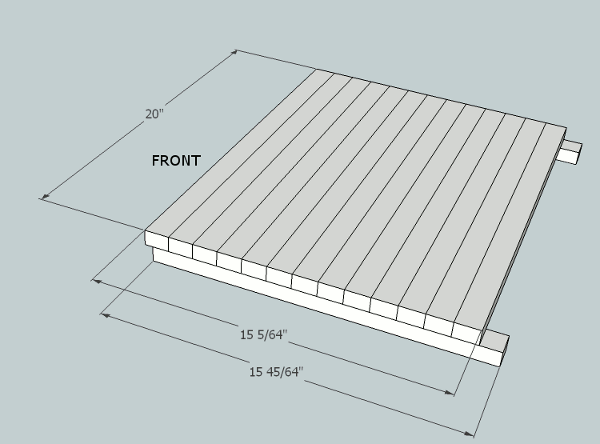 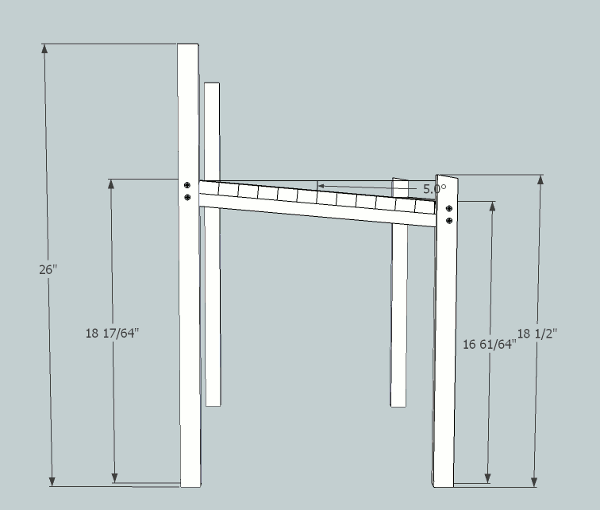 This is how to attach the 14th stick at the back: 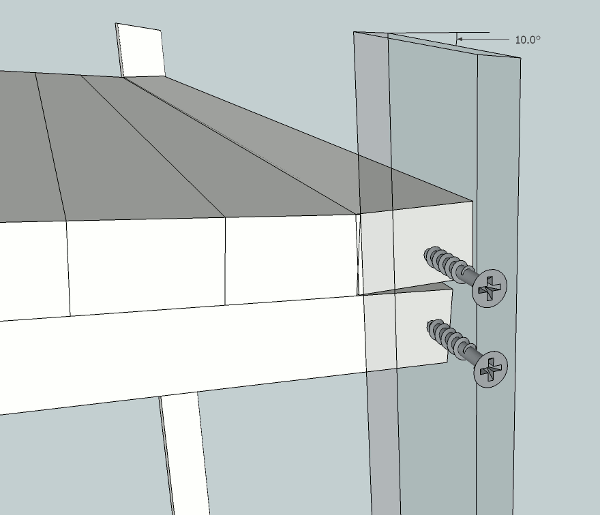 Make sure the 14th stick is level with the horizontal when attached. It’ll make your life a little easier. Screw in the 2 #6, 1.25″ from the side as shown, and then screw the 14th stick to the attachment plane stick from the bottom with a #4, 1.25, avoiding the #6. The #4 isn’t shown since you’ll have to be creative in getting it in there.

Next we’ll connect a bottom support to add some rigidity to the legs. You can build it separately and attach or do once piece at a time to the actual chair. Doesn’t matter. 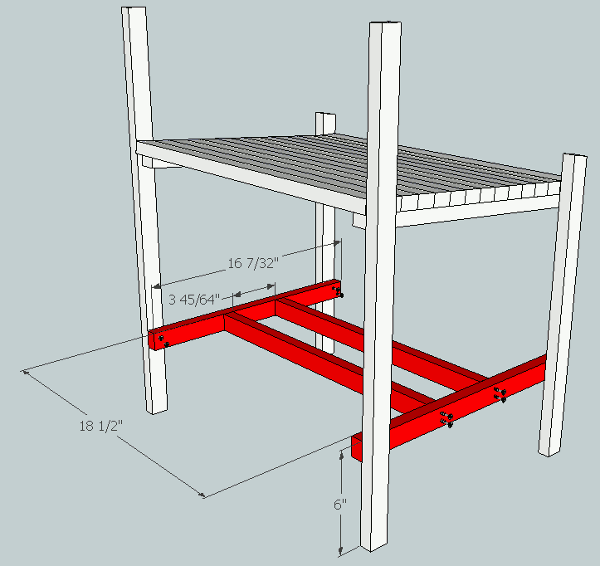 You do need a double screw in each leg to keep the sticks from turning in place or the whole thing from racking. Use #4 if you’re uncomfortable squeezing stuff in or #6 if you are comfortable. Obviously add screws to all the equivalent symmetric surfaces I didn’t picture.

Now we’ve moved into the interesting part. We’re going to make the back separately from the rest of the chair, and then talk some about integration. Integration is important to get right or you’re going to create a weak joint that may potentially fail. 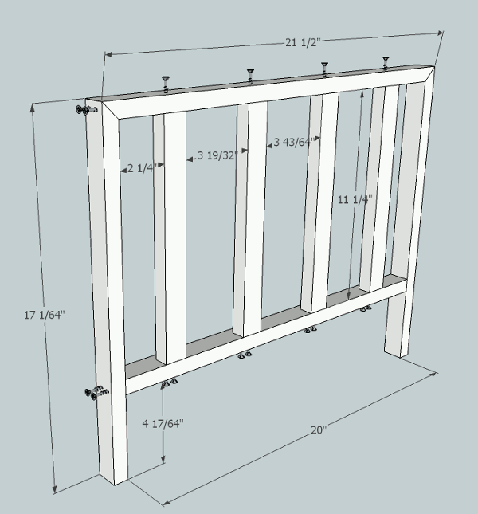 Shown here, the chair back has to maintain the seat’s 20″ width plus 2 sticks. It’s going to sit directly on top of the legs you cut earlier at 10°. If you forgot to do so earlier, we can fix that at this time. The top corners are cut at 45° to make a nice smooth edge. I highly recommend using the exact same stick or style of stick for the top and 2 sides of the back. Different sticks and manufacturers have slightly different aspect ratios which will make things look slightly off. So, try to use the same stick! You don’t need the double screws at the corners and can use Liquid Nails or another glue.

You need at least 3″ from the bottom of the back to that first cross member, shown as 4 17/64″ here. This is for your butt to stick out. You need it. Also, I choose to make the 4 vertical supports attach right up to the front of the back; you can see the screws aren’t centered. This provides more surface area for the chair to actually support your back. The alternative is recessing them into the middle of the cross beams but it’s up to you. Shown below is the rear view of the back. 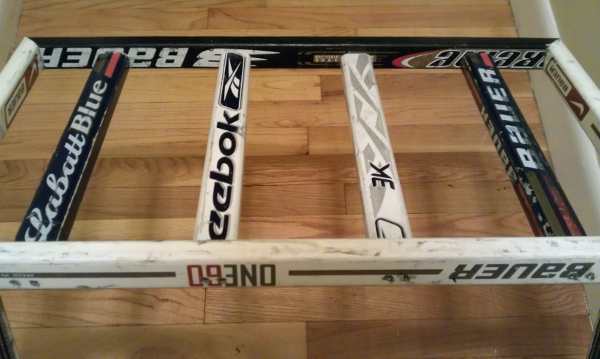 The 4 vertical beams need a double screw in at least one side. This will keep them from spinning in place. I  did it on the bottom where people will see fewer screw heads. I used #4, 1.25″ for this.

Now, the bottoms of the outermost back supports sticks shown to be 17 1/64″ earlier need just a normal straight cut. Placing them on the legs will force the back to be at 10° since you made the angle cut previously. However, if you forgot to cut the legs at 10° earlier, you can go ahead and cut 10° off these support sticks for the same effect. Be careful in choosing the right way to cut, the back isn’t exactly symmetrical the way I did….

Now for attaching. Pay attention to these drawings and images: 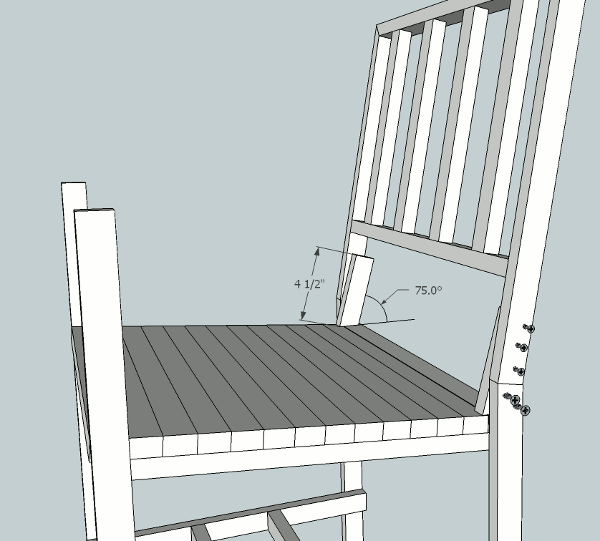 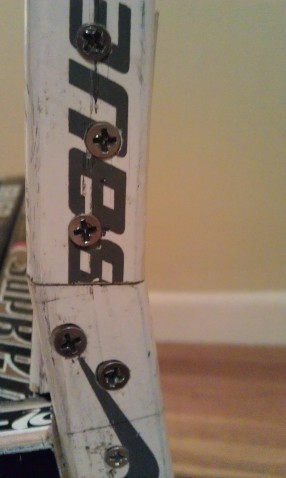 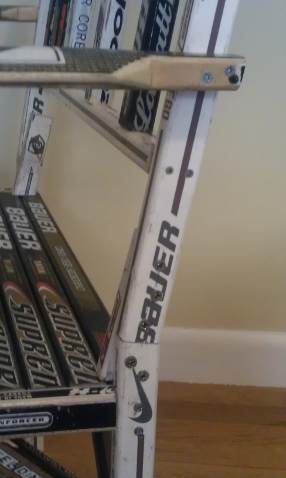 IMPORTANT
There is a small attachment piece that connects the back to the legs. It’s 4.5″ long and I had it cut to be at an angle of 75° from the horizontal. No real reason why that length is needed, it just ended up being that way for me. I really recommend attaching these pieces to legs first using 2, #8 1.25″ wood screws to bulk things up. The interface from of the chair back to the legs is a big failure point (most people avoid having this by using 1 continuous stick for the legs and back but it makes for a less comfortable chair). Get the attachment piece as flush against the #14 stick in the seat as you can. The goal is that when someone leans against the back, the attachment piece pushes against the #14 stick in the seat instead of straining the back-leg joint. Once you’ve completed that, attach the chair back to the attachment piece using 3 #6 screws, again making sure the back is as flush to the top of the legs as possible. This joint will be further reinforced when the arms are attached.

Now we have a back, a seat, and legs. Now we need arm rests. Arm rests will be more comfortable and add a significant amount of rigidity to the chair by creating a counter-torque about the back-leg joint that opposes the torque created by the weight of the person. Grab your goalie sticks!

Cutting some off the corners off at 45° makes the edges less sharp for people bumping into them. Cutting the rear of the goalie stick at slightly greater than the 10° back angle allows for error when mounting the arm rests to keep a corner from sticking out.

The arm rest shown here isn’t quite at horizontal. It’s up to you if you want it at 0° or not. You’ll need to create the arm rest attachment pieces which connect to the front legs via two #6, 1.25″ as shown but also connect to the arm rest via #6, 1.5″ from the bottom. Be very careful with these as you don’t want the screw bottoms to poke through the top of the goalie stick! 1.5″ should be just the right amount if things are centered. You’ll need the 1.5″ length screws to attach the arm to the back. Use two screws to make sure it holds well. It’s shown in the figure that the arm rest is 7 3/4″ from the back-leg joint. Yours will no doubt be slightly different than that;  break out your calculator and do some trig to make sure it’s what you want it to be for the arm rest angle or use your leveling app. 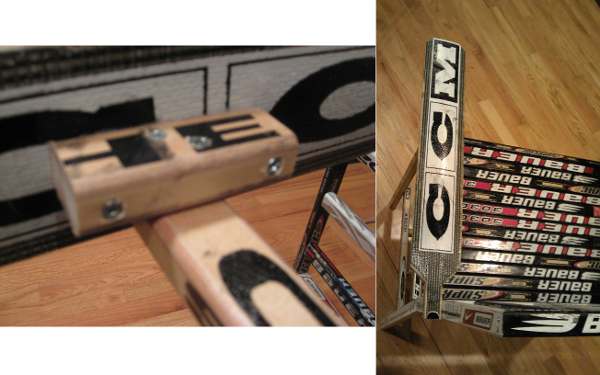 Your chair is done! Sort of. It might look like a chair, but it isn’t really. Try sitting in it, gently. You’ll notice a lot of wiggle in the legs. Though it looks complete, it clearly isn’t and it needs more supports. We’ll add the supports to the legs at the same time we add some of the finishing touches to cover up the sides of the seat. 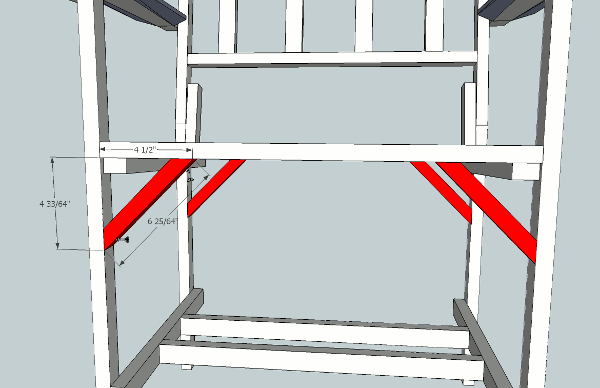 These are easy to make and you can cut the angles at the ends to be 45°. You may have to slightly “twist” stick #1 on the front of the seat to lie flush with the support, but it shouldn’t be difficult. Note the direction and installation of the #6, 1.25″ screws. They should go in at a slight angle to maximize the amount of wood it catches.

Now add some finish to cover up the stick sides and clean up the front. This is where the last 0.5 stick comes from! 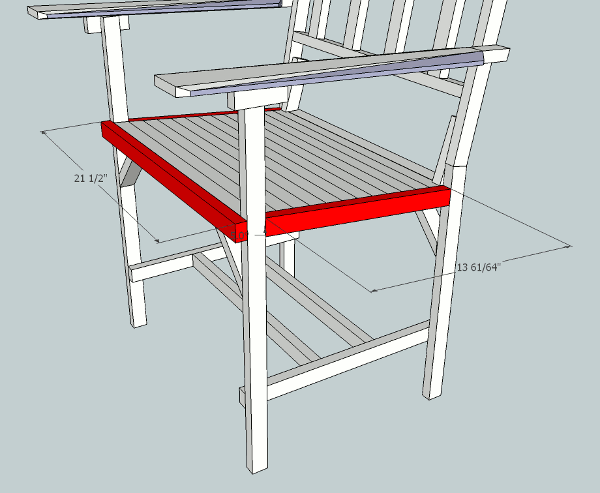 No screws are shown because I don’t recommend them for a clean look here. Use Liquid Nails and your bar clamps. Finish their attachment with a couple finishing nails. The finishing pieces on the side will need to be cut to the appropriate length as your seat allows, the angles on either side modified for the clean look. It should be 5° in the appropriate direction on each side to account for the seat angle. 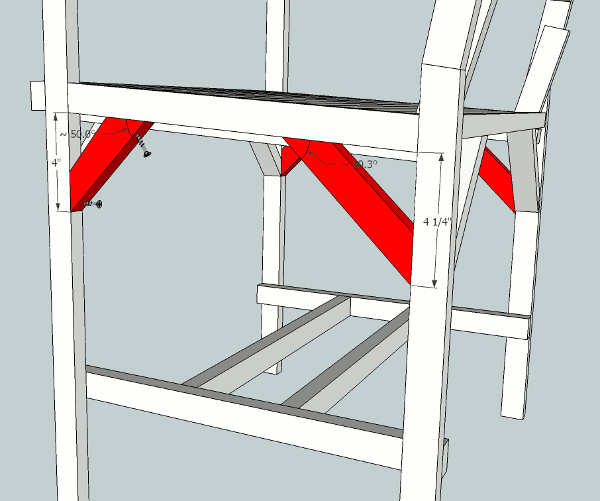 Again, note the angle of the screws. These are slightly more difficult to put in as you must accommodate the angling of the seat on the supports. I chose to modify the angle on the supports at the seat side, keeping the other at 45°. The 40.3° should be closer to 40°, but a lot of trial and error is really needed. Cut the pieces to be slightly too long, and start testing to make sure you have the angles right, cutting to adjust as you go along. 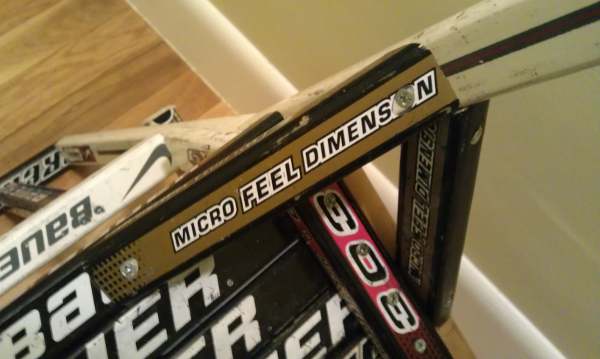 Now you’re all done! You should have something that looks like this: 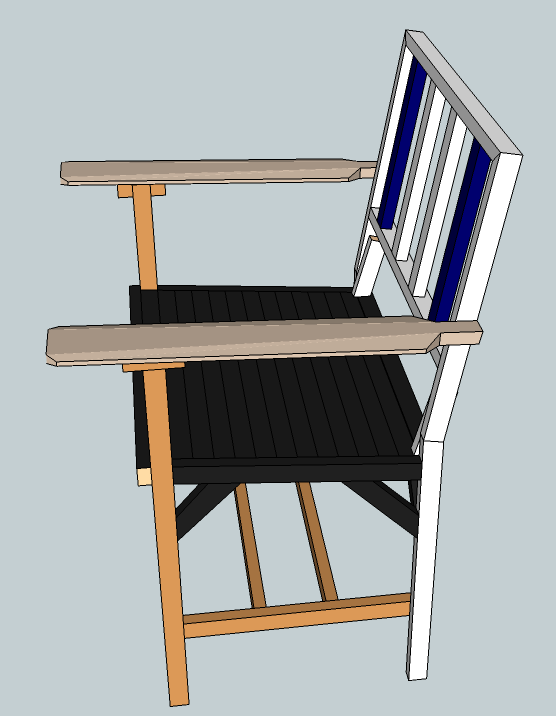 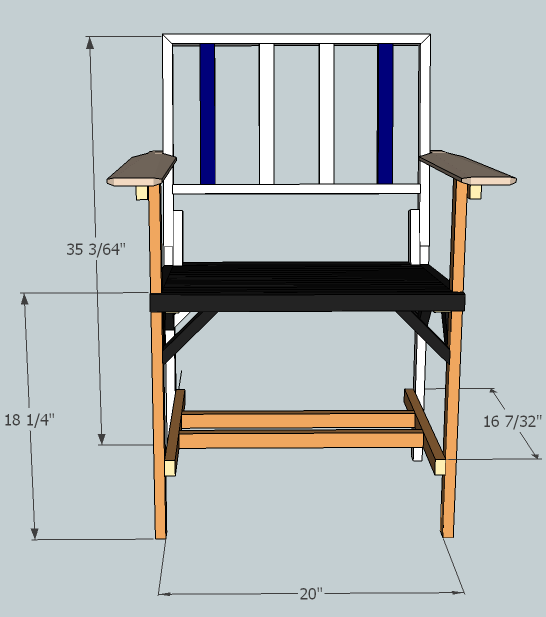 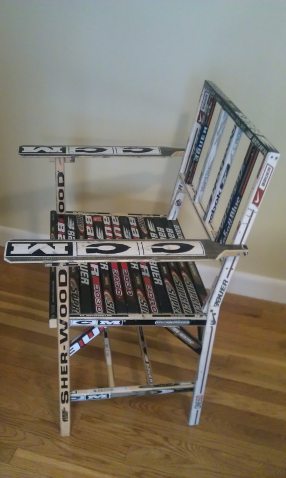 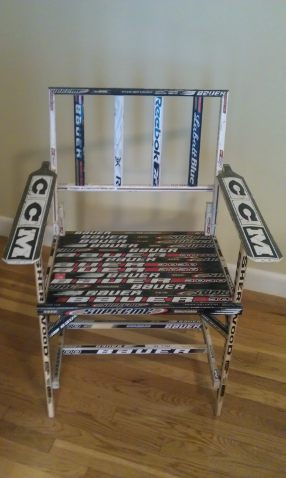 For a full model of the chair, check Models.